Marlon finds waking up at 8 early.  But just wait until tomorrow when I am allowed to sleep in, all of a sudden he'll be up earlier.  Nah I doubt it.  He likes his sleep.  We were speaking with Nancy, another child life specialist, today, and came to the subject of the steroids and I realized in retrospect just how crazy-making they are.  I had heard about the emotional ups and downs and also the food cravings.  One thing that was glossed over was the sleeplessness.  At the time I saw many reasons why he wasn't sleeping well but now I see it was the pills.  Thank goodness he gets a reprieve from them

The drive this morning was very foggy but pleasant enough.  Finger poke again and shortly after we got to clinic we were informed he was to have another transfusion.  If the red blood cells go below 70 then they give transfusions.  His was 72 but considering we are going into a 3-day weekend and the week of treatments behind him they felt it was necessary.  Didn't take as long this time as they had made a match on Tuesday.

One of the little boys (2ish) at the clinic today had my attention.  So cute and active. Playing with this, running that way, moving chairs, and back and forth.  Non-stop.  A while later I noticed he was sleeping while getting a transfusion.  I wonder about getting super active little kids hooked up.  I imagine mom's running after their toddlers pushing the IV pole this way and that. 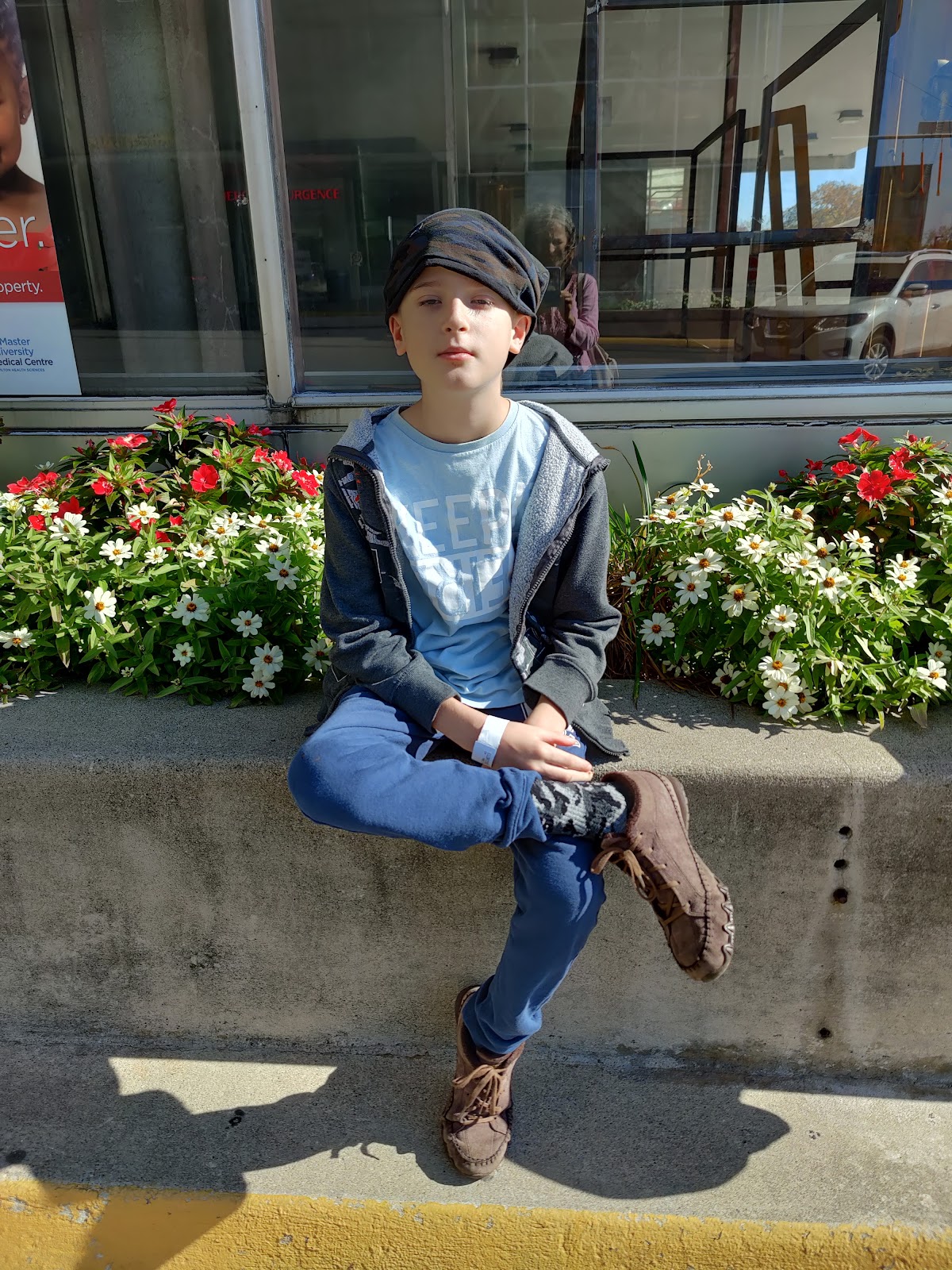 Waiting outside for Louise (he likes to look grumpy)

What a beautiful day.  Just as we were pulling into the driveway I got a message from Linsy saying the power was out.  It was out for just under two hours.  Luckily we didn't miss it too much.

Marlon's mobility is getting better even if he doesn't feel great.  We went to the garden to harvest potatoes and carrots.  Normally he would have to help but that wasn't expected of him. He did point out that he was the one that planted most of the potatoes in the garden in the spring.  While Marlon stayed with us, Thomas and Linsy loosened the ground, I fished out the potatoes, threw them to Marlon, and he put them in the bucket.  At least he was able to participate and he is pretty good at catching.

Marlon's weight was up again today, almost at his admission weight, still low but going the right way.  Problem is he still has very little appetite.  He wanted a hot dog for lunch.  I bought him one from one of the food places across the street from the hospital.  He said the bun was horrible.  He did eat a bit when we got home but was not interested in supper though did eat some.

Glad we don't have to rush off to the hospital for the next three days. They will be celebrating Halloween at the clinic and put a lot of effort in the decorations.  We were impressed with what we saw so far today.  Something to look forward to.